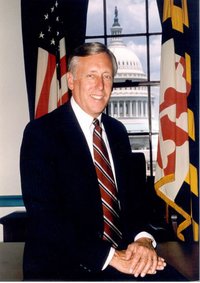 Steny Hamilton Hoyer (born June 14, 1939) is a Democratic member of the United States House of Representatives, representing the 5th Congressional District of Maryland since 1981. Hoyer also has the distinction of serving as the House Majority Leader, second in command to the Speaker of the House, Nancy Pelosi (Calif.). Prior to holding this position, he served as the Minority Whip.

Hoyer was born in New York City but grew up in Mitchellville, Maryland. He graduated from Suitland High School in Suitland, Maryland and went on to attend the University of Maryland, College Park, earning a B.S. degree in 1963. He earned his law degree from Georgetown University in Washington, D.C. in 1966. He and his deceased wife, Judy Pickett Hoyer, have three daughters: Susan, Stefany, and Anne.

In 1981, Hoyer was elected to the House of Representatives by special election to succeed the ailing Gladys Spellman from the fifth congressional district of Maryland. He is now the longest-serving House member from Southern Maryland in history, as well as the highest-ranking member of Congress in Maryland history.