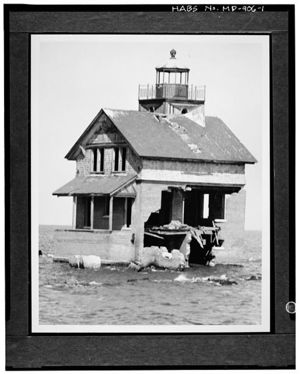 Note: The following report was archived by the Library of Congress as a TIFF image file. Somd.com converted it to text using OCR technology for ease of viewing and searching on the internet. Conversion errors may exist.

The Cedar Point Lighthouse is located approximately one-third of a mile off Cedar Point, the conjunction of the southern shore of the Patuxent River and the Chesapeake Bay in St. Mary's County, Maryland. The lighthouse stands on a partially submerged 1.53-acre island which is the remnant of the original Cedar Point, destroyed by erosion.

The United States of America. Under the control of the Department of the Navy.

Derelict, (Partially demolished on September 1, 1983. The remainder is being gradually destroyed by the action of weather and waves.)

The significance of the Cedar Point Lighthouse lies in the history of navigation and commerce in the Chesapeake Bay. Additionally, the shell of a building which remained in 1981 had some architectural interest in the area of the gable ends, tower, and lantern. No technological distinction has been found for the building. The reader is directed to the comprehensive Lighthouses of the Chesapeake Bay listed in the bibliography for a frame of reference in which to evaluate the significance of the Cedar Point Lighthouse. One hundred lighthouses were constructed at seventy-four locations in the Chesapeake Bay in the period from 1791 to 1910. Of these, thirty-two remain – and are portrayed in Lighthouses – and three are still manned. At present seven of the existing lighthouses in the Chesapeake Bay and its tributaries are listed on the National Register. They are Thomas Point Shoals, Cove Point, Drum Point, Havre de Grace, Piney Point, Old Point Comfort, and New Point Comfort.

1. Date of erection: 1896 according to the records of the Lighthouse Board, then under the Department of the Treasury.

2. Architect: Individual is unknown. The Lighthouse Board staff was undoubtedly responsible for the lighthouse's design.

Original and subsequent owners: The Cedar Point Lighthouse has been owned by an agency of the U. S. Government for most of its existence. In 1914 the Treasury and Commerce Department granted a permit to the Arundel Corporation to dredge the property for sand and gravel. Not surprisingly, this business arrangement coincided with the progressive erosion of Cedar Point. Early twentieth century maps show first a substantial pond at the center of the point, then the erosion of the Patuxent shoreline which makes the pond an inlet, and finally the erosion of the Bay shoreline making the lighthouse site an island and creating a new Cedar Point to the west.

In 1928 all of the 1.53-acre parcel except a 100 square foot parcel was sold to the Arundel Corporation. The light, by now a modern post beacon, was moved to the parcel retained. In 1933 the post beacon light was destroyed and a light was reinstalled in the original lighthouse building. In 1954, the Cedar Point Light was completely shut down and the entire property passed into the ownership of the U.S. Navy, operators of the adjacent Naval Air Station, Patuxent. (The Navy purchased the larger part of the property in 1942, but discovered the existence of the 100 square foot reserve still held by the Coast Guard in 1958 at which point the Coast Guard transferred this plot to the Navy).

"Contracts were made for furnishing the metal work and for erecting the lighthouse. The metal work was finished and delivered at the Lazaretto lighthouse depot. On May 7 the erection was begun. By the end of June the concrete foundations of the swelling and light-tower were finished and the frame partly erected. The foundation for the oil house was laid and the rafters were fitted together. The boathouse and fog belt tower were nearly completed, and the brick foundation of the outhouse was laid and the frame was made ready for erection. The date fixed by the contract for the completion of the work is September 1896. and the station is to be ready for use by that time."

The completion was described by the 1897 Report:

This station was completed by the contractor on September 20, 1896. The illuminating and fog bell apparatus wore then installed, and everything was put in readiness for the exhibition of the light. The latter was shown on October 31 for the first time. It is of the fourth order, flashing red every five seconds. The fog bell is struck at intervals of thirty seconds during thick or foggy weather. The lighthouse consists of a keeper's dwelling, built of brick and wood in cottage style, from one corner of which rises a square tower of the same materials, supporting a lantern. The dwelling is three stories in height, including the basement, and the tower and lantern rise 50 feet above the ground. The focal plane of the light is 45 feet above mean high water. The fog bell and apparatus are placed in the upper room of a wooden structure 35 feet high and 12 feet by 16 feet in plan, the first story of which contains a summer kitchen, and the second floor two store rooms. There are also a brick oil house, a frame boathouse, and a small outhouse. Screens were provided for the doors and windows of the dwelling.

5. Alterations and additions: The principal "alteration" to the original building other than the changing of the actual light described above was the collapse of the bell tower in the autumn of 1957. Other side buildings described in the 1897 Report such as the frame boathouse, brick oil house, and outhouse have also disappeared.

As stated above the Cedar Point Lighthouse's historical significance is that it played a modest role in the history of navigation and commerce in the Chesapeake Bay. It also played a role in the history of technology as it accommodated different types of lenses and lighting mechanisms over time. However it is one of seven remaining lighthouses on the Bay.

The Cedar Point Light was of the fourth order Fresnel lens variety. The inside diameter of the lens was 19 11/16 inches; the height was one foot eight inches. The light first utilized in the Cedar Point Lighthouse was undoubtedly an oil burning lamp creating an open flame. Only later in the early twentieth century would the improved incandescent oil vapor lamp have been substituted, and still later, electricity. The original Cedar Point Light is recorded as having flashed every five seconds and having been visible for seven miles. The first keeper was Benjamin F. Toy and his salary was $560 per annum.

1. Architectural character: The building was described in the 1897 Report of the Lighthouse Board as being built in the "cottage style." In fact, the building does possess a variety of materials and some pleasing ornamentation. (A sunburst pattern of wood slats decorates the gable end).

2. Condition of the fabric: The Cedar Point Lighthouse is a structurally damaged building which stands on an island usually submerged under a foot of water. It is essentially a shell exposed to storms and the normal action of the wind and waves. One corner pier has failed; windows and doors are gone. The historic chimney stack is gone, but the roof appears intact.

B. Narrative Description of Exterior, Interior, and Site.

The paucity of information available dictates that the narrative format be used for this section.

The Cedar Point Lighthouse is a two and a half story rectangular plan building with a gable roof from which a low square wooden tower rises at the corner. As stated above, it is situated on a small island—the remnant of an eroded point of land—which is surrounded by a rip rap barrier. Despite the barrier, the island is generally under nearly a foot of water. Several yards away from a corner of the building are the remains of the fog bell tower which collapsed in 1957. Other out buildings known to have been present but of which nothing remains today are a brick oil house, an outhouse, and a frame boathouse.

The basement and first stories are of brick while the second story is shingled up to the line of the tops of the windows. From there the gable ends are surfaced in wood. A sunburst pattern of wood slats decorates the highest portion of these areas.

The wood frame and brick building is oriented towards the contemporary point to the southwest-west and the open bay in the opposite direction. The gabled elevation, which faces toward the point, has a covered porch which is an extension of the brick basement. A historic photograph (1900) indicates that a full two and half story wing existed there. The other gabled elevation facing toward the Chesapeake Bay originally had a wooden porch but there is now no trace of it remaining.

The square tower which rises from the northeastern corner of the roof has oculi at the center of each four facets. At the top of the tower is a metal railing and an octagonal lantern which contained the Fresnel prism.

The 1900 historic photograph shows the now ruined fog bell tower as square in plan and three stories in height with the top two faced in shingle. It was 35 feet in height and Italianate in style.

Today the lighthouse building is essentially a shell. Windows and doors are gone. The historic chimney stack is gone. The roof, however, appears intact.

See the site plan for a description of the Cedar Point area in 1976.

A. Early views: Two historic photographs identified as dating from 1900 printed in the October 24. 1957 edition of the Lexington Park, Maryland Enterprise. (Not to be found in the photographic archives of his paper).

The tower including the wood base and the lantern were removed by a crane mounted on a barge. First the lantern was removed; then the supporting members of the tower were cut by chain saw, and the tower was lifted by means of a bar inserted through the occuli. The elements thus removed were preserved and moved to the Test & Evaluation Museum at the boundary of the Naval Air Station for outdoor display.

The gable end was removed by the crane during demolition of the roof. It was preserved and displayed at the Calvert Marine Museum. The remaining damaged portions of the lighthouse were allowed to decay in situ.

Mitigative documentation was prepared in 1981 by Lawrence P. Earle of the Chesapeake Division, Naval Facilities Engineering Command. Several additions were made to the documentation in 1985, as noted in the text.