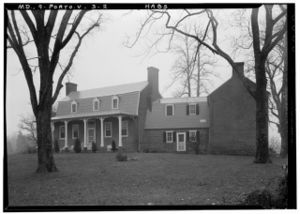 The plantation called Habre de Venture, owned by Thomas Stone. He was a well respected lawyer who voted for and signed the Declaration of Independence. Both Stone and his wife are buried on the site. In 1977 a fire gutted the central block and severely damaged the West wing. However, the site was reconstructed.

Haberdeventure was the country home of Thomas Stone during his years as a Maryland state senator and member of the Continental Congress. Stone is best known for his role as one of the four Maryland signers of the Declaration of Independence in 1776. Stone purchased Haberdeventure in 1770 Construction of the family home began shortly thereafter in 1771.

Thomas Stone seemed to be interested in Haber de Venture more as a suitable site for his new home rather than as a source of steady income. Only about half of his original 442 acre plantation was suitable for cultivation. The other half consisted of wooded ravines and hillsides. Limited agricultural production consisted of raising livestock and growing such crops as corn, wheat, and tobacco.

It is likely that the Haberdeventure plantation supported a community of 25 to 35 people during Thomas Stone's ownership, including slaves and Stone's extended family. Stone was very active in real estate transactions and at the time of his death in 1787, Haberdeventure had increased in size to 1077 acres. Descendants of Thomas Stone continued to own the property until 1936. Authorized as a National Historic Site in 1978, the plantation was purchased by the National Park Service in 1981. Ongoing restoration efforts will eventually restore the site to its mid 19th century appearance. Restoration to an earlier period would require the removal of historically significant 19th century structures.

HABRE DE VENTURE WAS THE HOME OF THOMAS STONE FROM 1770, WHEN HE PURCHASED THE PROPERTY, UNTIL HIS DEATH IN 1787, BEST KNOWN AS A SIGNER OF THE DECLARATION OF INDEPENDENCE, STONE SERVED IN THE CONTINENTAL CONGRESS FROM 1774 TO 1778, AND AGAIN IN 1784. HE WAS ALSO ACTIVE IN FORMING THE PROVISIONAL GOVERNMENT OF MARYLAND, AND SERVED IN THE STATE SENATE FROM 1776 TO 1787.

AN IRREGULAR, FIVE-PART MARYLAND MANOR, HABRE DE VENTURE REFLECTS SEVERAL STAGES OF CONSTRUCTION, THE EXACT SEQUENCE OF WHICH IS NOT CURRENTLY KNOWN. THE STORY-AND-A-HALF CENTRAL BLOCK WAS COVERED WITH A GAMBREL ROOF WITH DORMERS, AND CONTAINED HANDSOMELY PANELED ROOMS. (THE WOODWORK IN THE LIVING ROOM WAS REMOVED FROM THE HOUSE AND INSTALLED IN THE BALTIMORE MUSEUM OF ART IN 1928). THE FRAME EAST WING SERVED AS STONE'S LAW OFFICE, WHILE THE FRAME-AND-BRICK WEST WING WAS THE KITCHEN AND SERVICE AREA. THE WINGS AND CONNECTING HYPHENS ARE BUILT AT ANGLES TO THE MAIN BLOCK, FORMING A PROTECTED FORECOURT.

THE EARLIEST REFERENCE TO HABRE DE VENTURE IS A DOCUMENT DATED 1685 WHICH SHOWS A LAND GRANT OF THE ONE HUNDRED AND FIFTY ACRES FROM "CHARLES, ABSOLUTE PROPRIETOR OF THE PROVINCE OF MARYLAND" TO JOHN BAREFOOT. THE PLANTATION WAS PURCHASED BY STONE'S UNCLE DANIEL JENIFER IN 1768 WHO IN TURN SOLD THE 442 ACRES TO STONE IN 1770.

THE PROPERTY REMAINED IN THE STONE FAMILY UNTIL 1936, AND IN 1945 IT WAS PURCHASED BY MR. AND MRS. PETER VISCHER, WHO MODERNIZED THE HOUSE AND RESTORED THE GARDENS.

ON NEW YEARS DAY 1977, A FIRE GUTTED THE CENTRAL PORTION, AND SEVERELY DAMAGED THE WEST HYPHEN AND WING. IN 1980, HABRE DE VENTURE WAS ACQUIRED BY THE NATIONAL PARK SERVICE AND BECAME A NATIONAL HISTORIC SITE. IN 1983, TEMPORARY ROOFS AND CHIMNEY CAPS WERE INSTALLED ON THE MAIN BLOCK AND WEST HYPHEN TO PROTECT THE EXISTING FABRIC. THESE HABS DRAWINGS AND A PROPOSED HISTORIC STRUCTURES REPORT WILL SERVE AS THE FOUNDATION ON WHICH FUTURE RESTORATION AND INTERPRETATION OF THIS IMPORTANT PROPERTY CAN BE MADE.