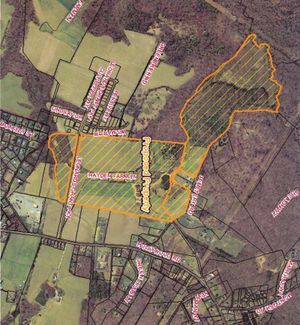 A 172-acre site, known as the Hayden Farm, is slated to be purchased by St. Mary's County Government at a cost of $5,259,500 for a new elementary school and other public facilities. The site actually consists of four parcels of land. As of April 3, 2009 the deal has not closed.

Capital funds were set aside specifically for acquisition of land by the County starting with a Board of County Commissioners decision in spring 2005, according to local officials.

The local Board of Education was under pressure to identify a site for the next elementary school by January 15, 2009 or risk losing state planning approval. This is the primary reason cited by local officials for the timeline of the Hayden Farm procurement.

The demand for the elementary school was facilitated primarily by the massive growth at nearby PAXRVR, facilitated by BRAC consolidations that included the relocation of the Naval Air Systems Command (NAVAIR) from northern Virginia.

The Board of County Commissioners for St. Mary's County approved the purchase for $5,259,500 at a meeting on Christmas Eve, Dec. 24, 2008. The vote was 4-1 with Commissioner Larry Jarboe (R) dissenting. Jarboe is quoted as saying, "I do not believe this is right. This stinks more than a whole bushel of rotten crabs." Jarboe reportedly argued that the value of the land was more like $2.5 million[1] The price agreed upon was $1,189,500 more than the highest appraisal made 18 months earlier. It should also be noted that real estate prices nationally had dropped significantly since the time of the appraisals due to the collapse of the so-called real estate bubble.

According to Karen Everett, County PIO, on April 3, 2009, the Hayden Family told county officials that they had an offer for approximately $7 Million from a commercial real estate developer.

One issue of concern is that the property has no frontage along the Leonardtown-Hollywood Road (MD ROUTE 245) -- the main thoroughfare from which traffic would have to access the county facilities which will be constructed on the land. There are approximately 9 parcels of land that lie in between the roadway and the property purchased by the county. The property is current accessible via Leonard's Grant Parkway.

2 Homes Being Leased Back to Family

Despite the above-appraisal price paid for the property, the deal also includes provisions to lease back two of the existing homes and some accompanying acreage to the family. (Need to obtain terms of the lease)