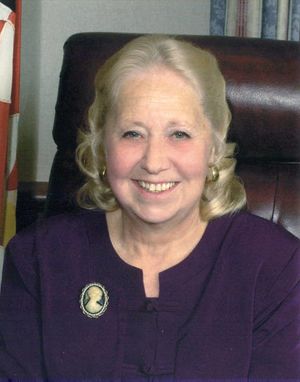 Mrs. Kelley is a former Federal government employee of 29 years. The U.S. Navy employed her for 12 years, working in both the personnel and supply management areas. She also worked for the Government Printing Office as a senior staff aide to the Superintendent of Documents, and as the Assistant Manager of the GPO warehousing/distribution facility in Laurel. She retired from the Department of the Interior, Office of the Secretary, where she served as the Department's Property Management Officer for eight years. She was employed as a property management consultant at the Holocaust Memorial Museum for two years following her retirement from the Federal government.

Additionally, she was a founding member and served as Chairman of the Safe Harbor Board of Directors, a non-profit organization, which spearheaded the opening and operation of Safe Harbor, Calvert County's shelter for abused women and children. She continues today as a Board member of that organization. She actively worked for the passage of Jessica’s law, which prescribes mandatory sentences for child sexual predators. Mrs. Kelley was also the Co-Chairman of the Maryland Chapter of Grandparents United for Children's Rights, an advocacy group which addressed legislative issues relative to grandchild/grandparent relationships, including grandparent visitation and kinship care.

An advocate for the humane treatment of animals, she serves on the board of the Friends of Felines and the Tri-County Animal Shelter. Commissioner Kelley was instrumental in the establishment of the Calvert Country Market, Watermen's Wharf, the equestrian facility at Kings Landing Park, the World War II memorial “On Watch” at Solomons, as well as the Skateboard Park and Dog Park. She has chaperoned at Project Graduation events for the past several years. She is also very supportive of the numerous Scouting programs in the County, making presentations at Eagle Scout and Gold Award ceremonies, as well as attending various scouting events. Mrs. Kelley has served as the Commissioner representative to the Parks and Recreation Advisory Board, the Calvert Alliance Against Substance Abuse, the Calvert Country Market Board, the Southern Maryland Agricultural Development Commission, and the Jefferson Patterson Park Board.

Mrs. Kelley and her husband Tom, have two daughters, four grandchildren, and a great grandson. The couple resides in Owings, Maryland.