SMECO is a customer-owned electric cooperative providing electricity to over 144,000 services in southern Prince George’s County, Charles County, St. Mary’s County, and all but the northeast portion of Calvert County. Co-ops are distinctly different from investor-owned utilities because co-ops are owned by their customers, and these members vote for men and women who sit on the Board of Directors.

SMECO is a member of the Touchstone Energy Cooperative.

SMECO was formed on Feb. 5, 1937 as the Southern Maryland Tri-County Cooperative Association, facilitated by President Franklin Roosevelt's Rural Electrification Administration (REA). Southern Maryland at the time was not a lucrative enough market to draw private capital to create a commercial electric utility. In the end, this was a blessing for customer-owners. SMECO rates are far lower than those paid by fellow Marylanders in areas serviced by for-profit corporations.

SMECO headquarters is based in Hughesville, Maryland. 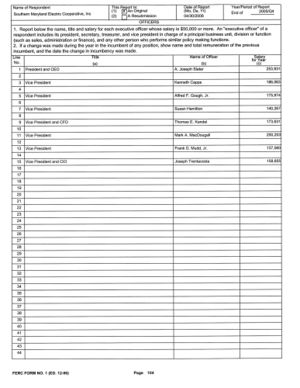 Note: All salary figures based on the 2005 Annual Financial Report SMECO files with the Maryland Public Service Commission (PSC).